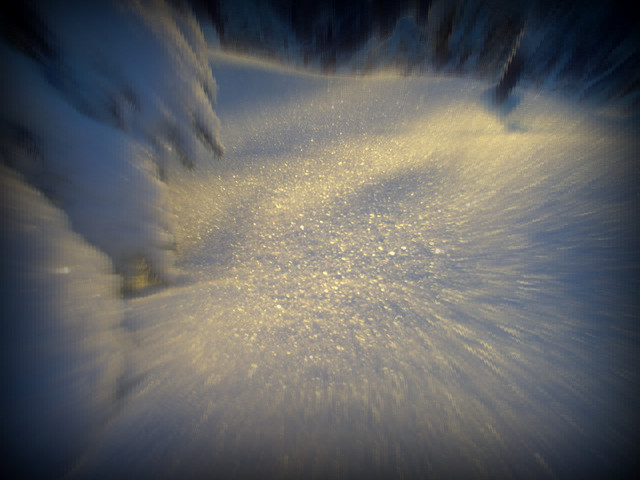 There are tales told over and over again.  Repeated from one generation to the next.    Every year on December 21st, the shortest day of the year,  the tale of Oswald gentleman rabbit, is recounted to young rabbits.  Their noses quiver and their ears wiggle in anticipation.  It is the story of Oswald the rabbit, who wore a magic coat.  A coat that allowed him to travel anywhere in the blink of an eye.  A coat with bottomless pockets he could fill with the universe.   A coat that  allowed him to become a human for a day.

And so the tale begins.

Oswald, gentleman rabbit, stamped the snow off his rather generous feet.  Brushed the ice crystals from his whiskers.   Shook the snow off his magic coat.   Everything was in place for the grand party.  Rabbits the world over would soon arrive at his burrow to celebrate the winter solstice.

Oswald’s ancient burrow was immense.  Deep, deep beneath the earth  the rooms in the burrow were so large one alone could hold more that a thousand rabbits.  Massive,  thick, gnarled  tree roots formed the ceilings.  Fireflies became living chandeliers  chasing away the darkness. 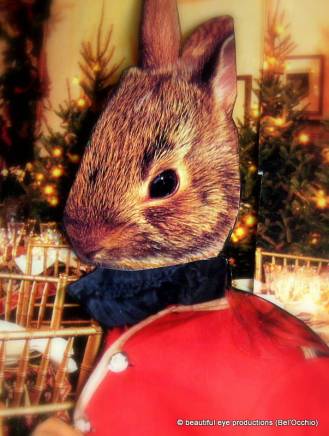 Oswald  reached deep into the pocket of his magic coat and began to pull out evergreen trees. Hundreds and hundreds of trees.   The fragrant smell of cedar and fir, spruce and pine enveloped the room.  The tree roots were wrapped in burlap tied round with holly and ivy vines.  Every year he filled the largest room in the burrow with the trees of Christmas.  Trees of every size circled the room.  Touched the ceiling.  Sparkling and glittering with diamonds of snow.  An indoor forest to celebrate the winter solstice. 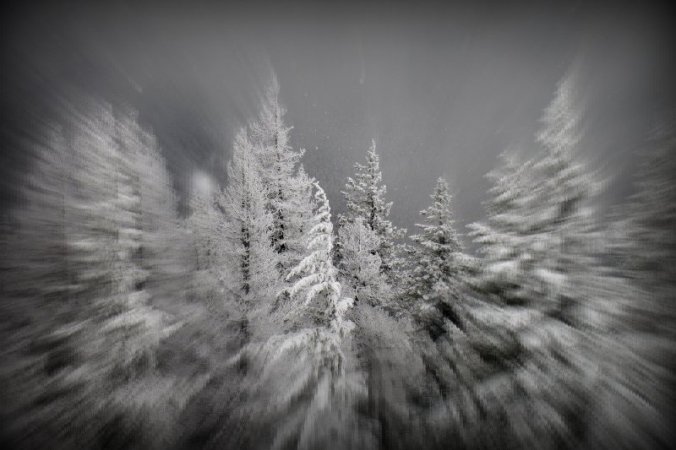 Oswald was very particular about the menu for his Winter Solstice Dinner.    He shopped for the finest delicacies in London.  In the rush of Christmas no one noticed the gentleman with  rather large ears wearing an elaborate red coat. filling basket after basket with Christmas delicacies.  Back  in the enormous kitchen of the burrow,  Oswald reached into the pockets of his magic coat  and drew out hamper after hamper marked F & M – Fortnum and Mason.

Tonight the rabbit guests would dine on magnificent vegetable patés,  Terrines of leeks and spinach,  Carrot and ginger puddings and salads of delicate butter lettuce and dandelion greens.   There would be bottles and bottles of ginger beer, elderberry wine and raspberry cordial to celebrate this the longest night of the year.  Rabbits are fond of nibbling on tasty bits of this and that.  Scattered through the dining hall were generous platters of ruby-red radishes and emerald-green asparagus, golden persimmons and scarlet pomegranates. 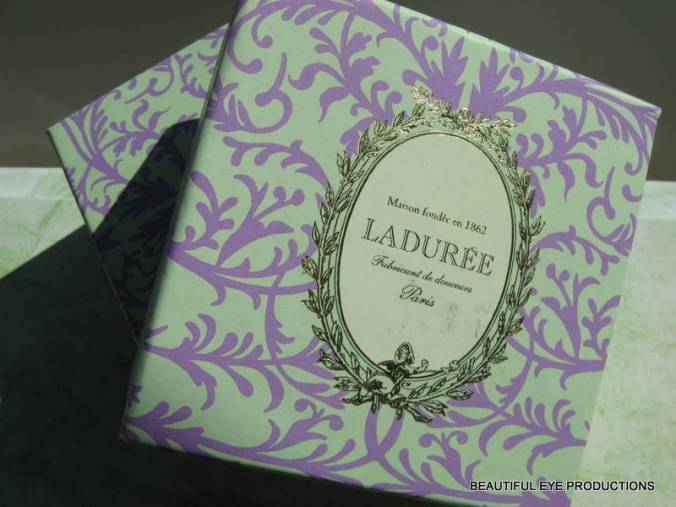 It is a little know fact that rabbits have a very sweet tooth.  Oswald planned on ending  the Solstice feast  with the very finest,  sweetest treasures from his favorite shop in Paris.   He walked along the Champ-Elysées  every inch the flâneur in his imposing red coat.   Ladurée, in all its elegance of  marble display  counters,  enveloped him in sweetness.   From pale green boxes he would fill crystal bowls with sublime treats.    Chocolate truffles and tiny lemon tarts,  raspberry macarons and St-Honoré cakes.    It would be a delicious ending to the shortest day of the year.

Later, much later.  When the hundreds and hundreds of  plates were empty. When the last little crumb of pastry was nibbled away,  silence filled the room.   The  well fed rabbits settled back on their golden chairs in anticipation of what was to follow.

From the top most branch of the tallest tree in the cavernous room came a glorious sound.   A single bird singing.     A lark ascending.  The tiny bird sang of peace,  compassion and understanding.   One by one from  surrounding trees birds joined in song.  Louder and louder.    A song  swooping, soaring, climbing higher and higher until the very earth around the burrow vibrated with its magnificence.

Midnight.  The fireflies folded their lighted wings and disappeared into the winter night.   Oswald donned  his magic coat.   He gathered into its bottomless pockets the forest of trees that had decorated the dining hall.  He left the burrow to travel through the dark, cold night.  He would plant these trees on struggling  clear-cut   hills.  On burnt, scorched  unyielding ground. On barren boulevards where anything green and growing struggled to survive  the killing breath of city pollution.

The Solstice night was ending when he  returned to his burrow.  Oswald’s  gift to the world was so simple, so unassuming when dawn broke  those who lived above the burrow passed by the newly planted trees.  Unaware.   Blind to their presence.  Thinking  they had always been there.  Taking for granted these trees so necessary for their living, breathing planet.

Rabbits have the stewardship of all growing things.  An enormous responsibility  in a world where many  deny  and disbelieve what is  happening to our changing planet.  Perhaps you don’t believe in fairy tales.  Than tell me this.    How do you know  that group of  young people planting trees on that clear cut hill  are not rabbits wearing magic coats?

15 thoughts on “HOW OSWALD, GENTLEMAN RABBIT CELEBRATES THE WINTER SOLSTICE AND TRIES TO SAVE THE WORLD ONE TREE AT A TIME. A fairy tale for adults who care.”