It was two days before Christmas.  In the deepest darkest part of the coldest night Max heard a woof  and slipped out his bedroom window onto the back of  Summer the Flying Horse.  Summer and Mocha, the dog with the magic ears, lived together on The  Enchanted Farm.

Mocha’s magic ears could hear cries for help; cries no one else could hear.  Those who truly believed in magic could  hear Mocha speak.   Summer was no ordinary horse.  When the sky became dark and the stars came out Summer would fly through the sky on enormous wings.

“In a far away place there is a sad, forgotten Christmas tree.   When the trees were  gathered to be taken to the city this tiny tree lay unnoticed in the snow. We must find it so it can have a happy Christmas.” said Mocha .

With one gigantic leap Summer soared into the sky, Max and Mocha riding safely on her back.  Mocha listened for the tree calling for help and gave Summer directions.  They flew over the sleeping city.  Max looked down.  He could see his street.  He could see his house.  Then the city disappeared and they were flying north over white fields of snow with black ribbons of highways and roads.

“We’re almost there.” cried Mocha.  Suddenly the sky became white.”Snow Dragons.  Snow Dragons.  They will try to stop us.  We must fight them off.”

The sky was filled with fierce dragons who breathed snow.  So much snow they could not see .  They were in a blizzard.  Summer, who had been flying quietly, gently through the sky began to furiously beat her wings.  Faster and faster.  The air became warmer and warmer, much too warm for the snow dragons.  They melted away.

Then far below Max saw the forgotten tree.  Summer swooped low over the field and Max reached down for the tree.  He hauled it up onto the flying horse  then up , up, up high into the sky they flew.  They flew so high they found themselves among the stars.  And as they flew the sad tree became happier and happier.  It reached out and caught the stars to decorate its branches.

You could just see little edges of morning light in the dark sky when Summer flew up to Max’s bedroom window.   Max slid into his warm bed and was fast asleep before you could count ten.

In the morning Max’s mother called him to come and see what someone had left on their doorstep.  It was a tiny Christmas tree decorated with glittering stars.

“I wondered who could have givens us such a wonderful gift” said his Mother.  Max just smiled and spread more jam on his toast.

The lot that sells Christmas trees is on the main street in our Village of Ladner.   Around the third week in November I begin watching for signs the trees are arriving.  First the fence goes up, then the poles for the trees.  At last the trees arrive. For me  Christmas has begun.

The ritual for selecting the trees is always the same.  The Good Husband goes in one direction.  I go in the other.  Each searching for the perfect tree.  It’s a gentle day. I walk through a forest of  evergreens.  A carpet of cedar chips mingles with the fragrance of the pine needles.  The secret to finding the perfect tree is to look for one with the broadest base.  It should have the thickest branches.    The Good Husband holds up a tree.  Too sparse.  I spy a fat looking tree with a broad base.  It is the one.  But then every year the tree we pick regardless of what it looks like,  is the perfect tree.

Putting up the tree is a two-day event.  The first day is the complex procedure.  The Good Husband sets up the tree, and then arranges the lights.  Sister Heather has sent me a pair of sparkling red birds.  The newest decoration is the first decoration to adorn the tree.

I bring out boxes of memories, and hang them on the tree.

Fifty-five years ago my Mother gave me this tiny copper kettle.  It is time worn and part of the spout is missing.    I hang it front and center. 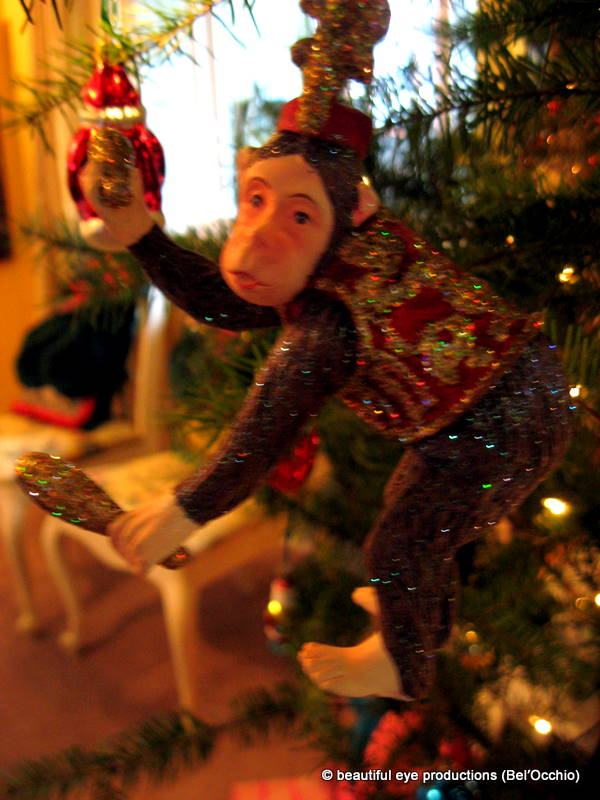 I pour a glass of sherry.  The tree is taking on a sparkling attitude.  I love the whimsey of  this  monkey.

The last decorations are “the angels”.    They are my favorite.  So much so one year I couldn’t put them away.   The Christmas angels spent a lovely year in various rooms in our home. 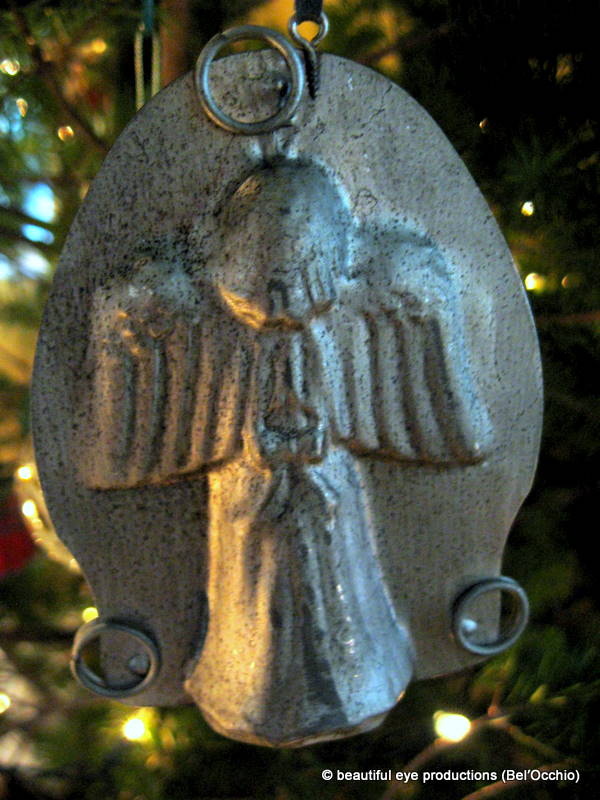 I adjust a glittering ball or two.  Step back and admire The Tree.  Sparkling, twinkling, happy Tree.

I’ll wrap more presents   This tree is calling for them.

The ritual of the Christmas Tree ends.

Sit by the fire.

Watch A Christmas Carol.  The best one with Alister Sim.

The Good Husband and I enjoy our “slow Christmas:”.